Welcome to the new issue of the EVN/JIVE Newsletter.

A lot has happened since the last edition, and this issue reports on exciting new scientific results, as well as updates on international projects and collaborations.

We wish to draw your attention to the results of the coronal radio-sound measurements of the ESA's Mars Express, which were obtained with the EVN thanks to uncommon applications of the VLBI technique. We further wish to highlight the report on the review paper on star formation and nuclear activity in LIRGs, a science area where the contribution of the EVN has been invaluable.

In the framework of the Global VLBI Alliance and the long-standing collaboration with the EVN, we congratulate our colleagues in the East Asian VLBI Network for the important step forward with their recently updated Memorandum of Understanding. The JUMPING JIVE project has very successfully ended, and the European radio community is now engaged in ensuring success to the EC-H2020 OPTICON-RadioNet Pilot.

Finally, the successful series of EVN online seminars is continuing, with an exciting calendar of speakers and topics throughout 2022.

All this and much more are included in this issue.
We thank our community for the continuous dedication which ensures advances, observations and excellent science delivery.

Observing proposals are invited for the European VLBI Network (EVN). Deadline: 1 February 2022, 16:00:00 UTC. The EVN facility is open to all astronomers. Astronomers with limited or no VLBI experience are particularly encouraged to apply for observing time. Student proposals are judged favorably. Support with proposal preparation, scheduling, correlation, data reduction and analysis can be requested from the Joint Institute for VLBI ERIC (JIVE). Check details of the call for proposals here.

JIVE/EVN initiates a pilot programme to provide extended support to teams new to the EVN, with little or no direct VLBI experience. This includes the scheduling of the VLBI run and the VLBI-specific parts of the data reduction (including a-priori amplitude calibration and fringe-fitting). Imaging, and the interpretation of the data is the responsibility of the team. We aim to support some standard VLBI projects, evaluated by the EVN Program Committee with the highest grades. See the call for proposals for more information. For further questions please contact the Chair of the EVN PC, Zsolt Paragi (evnpc@jive.eu). 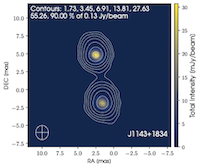 One of the most compelling mysteries in both cosmology and particle physics is the nature of Dark Matter. Its elusive detection coupled with unsolved discrepancies between some standard cosmo-logical (Lambda-CDM) model predictions and observations have paved the way to alternative DM models. A critical prediction of the CDM paradigm is the number of DM halos at sub-galactic scales, i.e. masses below ~1010 solar masses. Constraining this number would help discarding many currently viable Dark Matter models. We investigate this problem using strong gravitational lensing of active galaxies on the key but poorly-explored milli-arcsecond scales, i.e. milli-lenses. Gravitational lensed images with angular separation on milliarcsecond scales probe gravitational lens systems where the lens is a compact object with mass in the range 106 – 109 solar masses.  Compact objects in this mass range could be ... Read More

Nearby galaxies offer unique laboratories allowing multi-wavelength spatially resolved studies of the interstellar medium, star formation and nuclear activity across a broad range of physical conditions. In particular, detailed studies of individual local luminous infrared galaxies (LIRGs) are crucial for gaining a better understanding of these processes and for developing and testing models that are used to explain statistical studies of large populations of such galaxies at high redshift for which it is currently impossible to reach a sufficient physical resolution. In a recent review (Pérez-Torres et al. 2021), we provide an overview of the impact of spatially resolved infrared, sub-millimetre and radio observations... Read More

Very Long Baseline Interferometry (VLBI) observations of spacecraft inside the solar system have been applied to a broad range of research interests in recent years. One application is to remote sense the solar wind by the observation of a spacecraft during its solar conjunction. The VLBI baselines distributed along different Earth longitudes and latitudes form a network of projected baselines near the sun, provide a unique advantage to analyse the cross correlation of fluctuations among different stations, especially in the inner of the solar wind, with 10 Rs (solar radii). The goal of our coronal radio-sounding technique is... Read More

Radio galaxies are divided into two groups according to their morphology, namely Fanaroff-Riley type I (FRI) and type II (FRII). FRIIs generally have higher jet power than FRIs. The evolutionary models of FRII and FRI galaxies have been extensively studies [1,2]: each radio source starts as a compact symmetric object (CSO), grows gradually through a medium-sized symmetric object (MSO) phase, and then a fraction of MSOs successfully evolve into large symmetric objects (LSOs), including FRII and FRI galaxies. The practical radio galaxy evolution of individual FRII or FRI is very complex and depends on... Read More

The Institute of Radioastronomy in Italy tells the story of its origins
Tiziana Venturi, INAF, Istituto di Radioastronomia, Italy 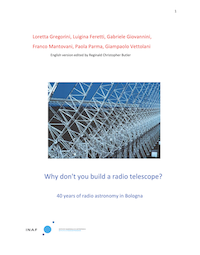 The Institute of Radioastronomy recently published a book on its origins, from the very early discussions among a group of young physicists, to the construction of the radio telescopes all the way to the science, technology and computing developments up to the year 2000. The first conversations on radio astronomy in Italy date back to the end of 1950s, a time when the field was new and full of promises for scientists. A group of young physicists at the University of Bologna started to think of building a radio telescope almost as a joke, as the title of the book suggests, "Why don’t you build a radio telescope? 40 years of radio astronomy in Bologna." The enthusiasm for this new branch of astronomy shortly led to the birth and growth of international collaborations with colleagues who were already engaged in the construction of radio telescopes throughout Europe, Australia and in India. The Northern Cross, the transit interferometer located in Medicina operating at 408 MHz, started its operations in the record time of 4 years, and already by the end of 1964 the first catalogue of radio sources at 408 MHz was produced and presented to the community. During its active life, the Northern Cross has provided 3 catalogues of radio sources, and has paved the way to the well-recognised Italian expertise in the area of radio galaxies, galaxy clusters and pulsars. Collaborations and strong friendships among colleagues from all over the world have been built around the Northern Cross. As the proverb says... Read More 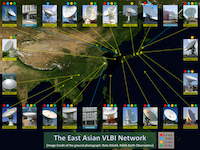 JIVE’s core business is supporting the European VLBI Network (EVN). One of those core businesses is the archiving of the correlated data sets that are created from observations carried out by the participating stations. Production correlation started at the end of 1999 and we have been backing up all those observations and other important data to magnetic tapes (DATs and LTOn), to safeguard the EVN science output from computer mishaps. Due to lack of resources these tapes have no duplicates ... Read More 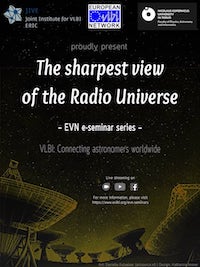 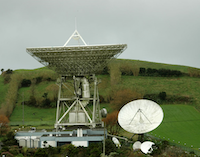 Radio astronomy and Space Infrastructures in the Azores region (Portugal) do present a great scientific and industrial interest because they benefit from a unique geographical location in the middle of the North Atlantic allowing a vast improvement in the sky coverage. This fact obviously has a very high added value for: i) the establishment of space tracking and communications networks for the emergent global small satellite fleets ii) it is invaluable to connect the radio astronomy infrastructure networks in Africa, Europe and America continents using Very Large Baseline Interferometry (VLBI) techniques, iii) it allows excellent potential for monitoring space debris and Near Earth Objects (NEOs). There is in S. Miguel island a 32-metre SATCOM antenna for upgrade that could be integrated in advanced VLBI networks and be capable of...Read More

The H2020 JUMPING JIVE project, which successfully passed its final review by the European Commission, has been instrumental during the past 4 years in the development and reinforcement of JIVE and the European VLBI Network (EVN) activities in key aspects for their sustainability that will impact the VLBI community in the next decades. The Joining up Users for Maximizing the Profile, the Innovation and Necessary Globalization of JIVE (JUMPING JIVE) project aimed to strengthen JIVE, enhance the European VLBI Network (EVN),  advocate its services and enlarge its partnerships, and prepare JIVE and the EVN for future scientific and technological challenges in preparation for global VLBI in the era of multi-messenger astrophysics. The 4-year project... Read More 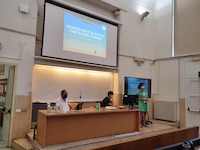 A Session on “Very Long Baseline Interferometry” was held on 2 September 2021, co-organised by JIVE as part of the XXXIV General Assembly and Scientific Symposium of the International Union of Radio Science (URSI GASS 2021) in Rome, Italy. The session scope was to highlight the relevance of VLBI in the fields of astrophysics, Earth and planetary sciences by bringing together experts in each field of application, providing a view of the state-of-the-art and the desired developments, to assess the central relevance of VLBI in the continuously evolving landscape of these disciplines. VLBI is a mature technique, whose applications are unique now that the need for milliarcsecond angular resolution and for extremely accurate localisation are the ultimate frontiers for some of the hottest scientific areas. For this reason... Read More 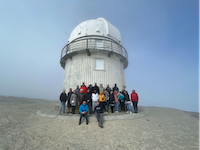 The OPTICON RadioNet Pilot (ORP), launched in March 2021, is one of the European Commission's new transnational access 'pilots' under Horizon Europe.  This four-year project is the result of the merger of RadioNet and OPTICON, two well-established and successful programmes of the ground-based astronomy community that have received EC funding for over 20 years. It brings together 37 institutions, including funding agencies, observatories, institutions developing enhanced services and key technologies, and universities, in an effort to support and develop seamless access to radio and optical facilities. The ORP mission is to facilitate astrophysical discoveries through a comprehensive set of research facilities by supporting a harmonised access procedure, unified data interfaces and improved services. It also aims to... Read More