Welcome to the September 2022 issue of the EVN/JIVE Newsletter.

A lot has happened since May. Most important we have finally been able to attend meetings in person and share the lively and collaborative spirit our VLBI community has always shared. The 15th EVN Symposium in Cork and the VLBI Special session at the IAU GA in Busan are important landmarks for a return to normality.

The selection of the science highlights clearly shows the innovative potentials of the EVN, as well as the broadness of VLBI, extending to hundreds of GHz in frequency all the way to EHT. The investment of EVN and JIVE to ensure users' support and broaden the VLBI users' community is continuing not only with the European Radio Interferometry School (ERIS 2022), but also with the new pilot programme which provides extra support to new users.

The list of forthcoming events deserves special attention, and clearly shows the VLBI community is moving forward, with new prospects for developments and new scientific challenges.

All this and much more is reported in this issue. Enjoy the reading.

We wish to thank our lively and enthusiastic community for the many results shared at meetings during the summer. These are the logs we need to keep the VLBI fire burning and expanding.

Observing proposals are invited for the European VLBI Network (EVN). Deadline: 1 October 2022, 16:00:00 UTC. The EVN facility is open to all astronomers. Astronomers with limited or no VLBI experience are particularly encouraged to apply for observing time. Student proposals are judged favorably. Support with proposal preparation, scheduling, correlation, data reduction and analysis can be requested from the Joint Institute for VLBI ERIC (JIVE). Check details of the call for proposals here.

JIVE/EVN has a pilot programme to provide extended support to teams new to the EVN, with little or no direct VLBI experience. This includes the scheduling of the VLBI run and the VLBI-specific parts of the data reduction (including a-priori amplitude calibration and fringe-fitting). Imaging, and the interpretation of the data is the responsibility of the team. We aim to support some standard VLBI projects, evaluated by the EVN Program Committee with the highest grades. See the call for proposals for more information. For further questions please contact the Chair of the EVN PC, Zsolt Paragi (evnpc@jive.eu).

Recent discoveries of so-called changing-look AGN (CL-AGN), have given us a rare view of extreme changes in the AGN state spanning a few months to years, which may give insight into major open questions about the nature of AGN fueling. CL-AGN are rare, with only a few dozen candidates in the literature. One of the most dramatic cases is 1ES 1927+654, a nearby (74.2 Mpc) and previously well-studied type 2 AGN which was observed to undergo a dramatic optical outburst beginning in December 2017. In this work (Laha et al., 2022) we report the evolution of the radio, optical, UV and X-rays from the pre-flare state... Read More

Quasars in the early Universe (z < 4) provide excellent tools to study the evolution of galaxies and supermassive black holes. These high-redshift sources are tracers of processes from early-time star forming activity to primordial active galactic nuclei (AGN). The latter are powered by accretion onto supermassive black holes (SMBH) with masses of up to 1010 𝑀⊙ (Sbarrato, 2021). In recent years, a couple of high-redshift jetted sources were revealed by various radio sky surveys. Because only about... Read More 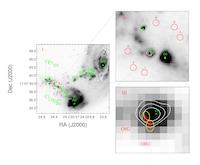 IIZw 096 is classified as a LIRG (Inami et al. 2010), and is one of the most luminous OHM galaxies known (Bottinelli et al. 1986). This particular source is the second system to host formal megamasers involving both OH and H2O species (Wagner 2013; Wiggins et al. 2016). Optically, IIZw 096 shows complex morphology (Inami et al. 2010). It contains four main regions, denoted A, B, C, and D (see Figure 1); sources A and B are possibly two spiral galaxies. Near-IR imaging and spectroscopic observations show that source D is a powerful starburst not associated with the primary nuclei (sources A and B), which could be a starburst in the disturbed disk of source A, or even the nucleus of a third galaxy (Goldader et al. 1997; Inami et al. 2010). We analysed two-epoch EVN archival data of the OH 1667MHz line emission of IIZw 096 and confirmed that this source’s OH 1667MHz line emission is mainly from two regions. We found no significant variations of the OH 1667MHz line emission from the two areas, including... Read More

Gamma-ray bursts have been serendipitously discovered in the late 1960’s (see Klebesadel et al. 1973 and Weekes 1999 about the initial discovery, and Kumar and Zhang 2015 for a recent review), but our understanding of the underlying physical processes is still far from complete. We have solid evidence that the main ingredient is a relativistic jet, that is, a narrow surge of plasma that travels almost at the speed of light. The short duration (seconds to minutes, rarely hours) and extremely large energy of these jets points to the central ‘engine’ (the place where these jets are born) being a black hole or a neutron star. Indeed, some supernovae have been identified (the first being SN1998bw, see Galama et al. 1998) in association to gamma-ray bursts, which clearly indicates that these formed following the core-collapse of a massive star – which is known to lead to the formation of a black hole... Read More 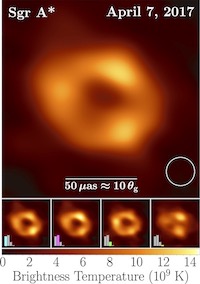 The Event Horizon Telescope Collaboration (EHTC) made global front page news with the first images of the M87 supermassive black hole in 2019. To image our Galactic black hole, Sagittarius A* (SgrA*), turned out to be a much bigger challenge. At last, on Thursday 12 May 2022 the EHTC presented the first image of SgrA* to peers and the public. This happened at different venues around the globe, with ESO headquarters in Garching, Germany, covering the news for Europe. The data for this image were obtained in the same observing run in 2017, but included a set of new and unique challenges to overcome. The much smaller intrinsic size of SgrA* causes it to vary on much shorter times than the typical length of a VLBI observing track. It was compared to taking a picture of a dog chasing its tail in a dark room. Consequently, it took several years for the EHTC to develop robust techniques for imaging and image validation. Eventually, an entire family of images was produced which is compatible with the data, and 97% of these images are consistent with a ring-like structure with a diameter of ~51 micro-arcseconds. The image shown to the press and public is a weighted average across this family (see Figure 1). Although the SgrA* image is second to the M87*, imaging our Galaxy’s black hole probably represents a more fundamental result, because mass and distance are so much more accurately determined as stars in orbit around it have been measured with great accuracy. The general public showed a keen interest in the result. The results were covered by many media and EHTC astronomers... Read More

The JIVE Annual Report 2021 presents a summary of JIVE’s many activities throughout the year.

The 15th EVN Symposium was originally scheduled for 2020. After cancelling this event in 2020 and holding an online “mini-symposium” in 2021, the full 15th European VLBI Network Symposium was finally held as a “blended” or “hybrid” meeting on 11-15 July 2022. Seventy-one in-person participants at University College Cork, Ireland, were joined by 42 participants online. The setup ensured that online participants could hear all speakers clearly, and that online presentations were visible on a large screen and were clearly audible. Both in-person and online participants could ask questions; the main limitation of the technical... Read More

On 11 May 2022, JIVE organised the first online EVN Users' Training Event with the aim to support first-time users of the European VLBI Network (EVN). The EVN Support Scientists guided participants through the different steps to allow them to prepare and submit an observing proposal as well as the scheduling of observations.A total of 61 participants from 20 different countries registered to attend this training event from completely different backgrounds, mostly outside the VLBI radio community. We hope this kind of training will boost connections and collaborations between groups from different fields... Read More 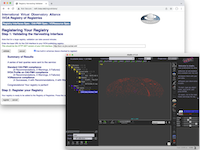 Thanks to the EC funded ESCAPE project, JIVE is now running its own Virtual Observatory (VO) service that provides access to all the public data in the European VLBI Network (EVN) archive hosted by JIVE.This VO service provides a searchable catalogue of all EVN observations that were correlated at JIVE (and a few correlated at the other EVN correlator at MPIfR in Bonn, Germany). The catalogue is made available through the International Virtual Observatory Alliance's (IVOA) standard Table Access Protocol (TAP) and provides search results describing the observations following the standardised IVOA ObsCore schema. The service can be accessed at http://evn-vo.jive.eu/tap but since we now also publish the service to the VO registry it can be easily found in applications such as Aladin and TOPCAT, or the PyVO Python module... Read More

It is time to join the Science Forum of the Global VLBI Alliance (GVAS), a Working Group in IAU Commission B4!
Francisco Colomer (JIVE, the Netherlands)

The Global VLBI Alliance (GVA) has established a Science Forum (GVAS) in order to promote VLBI widely. The GVAS was presented at the recent IAU B4 business meeting on 8 August 2022. The session presented the current and future plans for the main cm-VLBI networks (EVN, EAVN, VLBA, LBA), as well as the VLBI connection with SKA (SKA-VLBI). In the short discussion that followed, some topics are identified as core actions for the GVAS...Read More

The Committee on Radio Astronomy Frequencies (CRAF) is an Expert Committee of the European Science Foundation. It aims to provide a cost-effective single voice on frequency protection issues for European radio astronomy observatories and research institutes, achieving a significantly greater impact than that achievable by individual national institutions. By working together European observatories and institutes can profit from synergy effects by covering many more topics and learning from each other. CRAF was founded in 1988 and has since then been engaged with the International Telecommunication Union...Read More 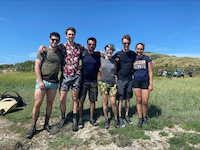 My name is Claire Cook, I'm in my fourth year of completing my Bachelor of Science in Astronomy from the University of Kansas in the U.S., and this summer I had the chance to work as a summer student with Suma Murthy, Rafaella Morganti, and Zsolt Paragi using VLBI to study the effects of Active Galactic Nuclei (AGN) on galaxy evolution. Working here at JIVE has been a unique and exciting opportunity. This summer project presented a myriad of new experiences for me—living abroad, working with VLBI, and engaging with such an internationally-collaborative organisation like JIVE. Out of all the internships for which I applied this summer, this one was my top choice for a reason and I’m more than grateful to be here. The JIVE community is a fun one and I’ve had a blast working with everyone here this summer. There was something about sitting at my desk in the JIVE corridor...Read More

OPTICON RadioNet Pilot (ORP) is one of the European Commission's transnational access 'pilot' programs under EC H2020, launched in March 2021. This four-year project brings together 37 institutions to support and develop seamless access to radio and optical facilities. Several members of the ORP community took the opportunity to meet at the EAS 2022 in Valencia, Spain, during the special session "European Forum of Astronomical Communities'' held on 30 June 2022. The session was chaired by prof. Lukasz Wyrzykowski (UNIWARSAW) and aimed to discuss the development of underrepresented astronomy communities in Europe and to present the current opportunities for researchers within Europe. The ORP communities were ... Read More